A common request is to maintain traceability into the supply chain. This has always proved to be problematic for a number of reasons, some technical and some political. I am offering here a potential solution.

We have, in many industries, now progressed beyond the clone-and-own approach to reuse, and some support for genuine reuse of requirements and other design data has become expected.

The underlying principle that I have used is that the organization owning the data is the only organization that will be afforded editing privileges. This applies whether the organizations in question are different legal entities, working to a contract, departments within a single business, or individuals with clear responsibility boundaries. This allows us to manage the access rights based on the owning organization.

Another issue has historically been that of access and firewalls. It has been rare for organizations to let suppliers inside their firewall. Cloud hosting eases this to some extent, and if your immediate reaction to that is one of horror that your data could be trusted to the cloud, then please look a little deeper. It can be as secure as working with a server in the basement of one of your many sites. 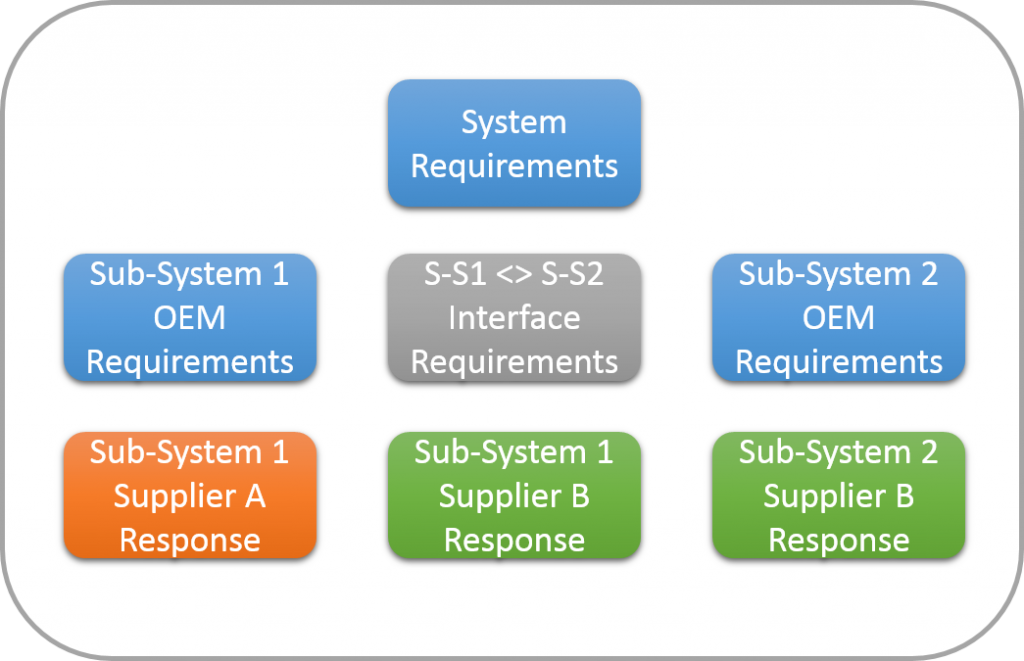 Interface requirements are a special case, as the need to collaborate increases in this area. It is a negotiated specification, where all parties need to be able to comment, and potentially contribute. By breaking this out into a separate PA, access can be managed through time as necessary.

It is very rare for competing suppliers to want to share information about their designs. Any shared information is at a higher level, and would be pushed back up to the OEM requirements. For example, the addition of new capability might be shared back to the OEM, and then flowed down to other suppliers of the same item. Suppliers may share, in read only, their implementation with a supplier of a different subsystem. This is likely when hardware and software are supplied separately. In most other cases, the relevant details will be handled in an interface requirements area.

How does this work in practice?

Initial delivery of requirements to supplier

The OEM works on system requirements and then breaks these down into subsystem requirements that will be delivered to the suppliers. Some effort is required to allocate the correct requirements to the correct suppliers, but this is a normal activity that has been happening for many years. The difference here, from the days of sending paper copies of documents, is that the allocation takes place in the tool. Some thought needs to be given to the partitioning of the data between PAs, to ensure that each supplier has all the data they need, and none of the data they don’t need.

Common requirements, such as Standards (International, National, Industry, and Organizational), should be placed in a separate PA that can be shared with all suppliers.

The allocated requirements and the common requirements PAs can now be shared as read only with the relevant suppliers.

Each supplier now works in their own Project Area. As implementation requirements are added, they can be linked back to the allocated requirements in the OEM PA.

The supplier is working in a separate PA, and so can have a different type system, with custom attributes to support their own internal process. All of the data in this PA will also be visible to the OEM.

Looking beyond the boundaries of DNG, the work can be managed in Rational Team Concert. With careful use of the Work Item Categories, confidentiality can be maintained between suppliers.

Interfaces are special case. This is an area where there is negotiation and collaboration between multiple suppliers and the OEM. The ownership of the interface could be supplier or OEM, and not all interfaces will necessarily be the same.

Regardless of the process for interface negotiation, the suppliers on both sides of the interface and the OEM all need visibility of the requirements. Breaking this out into a separate PA allows that visibility, and management of write access can be achieved within the PA.

Tying in the testing and the bigger picture

All of the RQM and DNG project areas, or rather the components within them, can be tied together with a Global Configuration (GC). This makes navigating between PAs straightforward.

If needed, the GC can work with components on different servers. This allows the suppliers to have their own RQM/DNG set up, and tie that to their customer’s data through GCs, thus maintaining traceability through the whole design, down to the lowest level. While there would be no single individual with visibility of concept through to fine detail, everybody would have the required visibility up and down from their own point of interest. This avoids discontinuities and the associated risks of duplicating data.

One Response to “Using DOORS Next Gen in a Supply Chain”